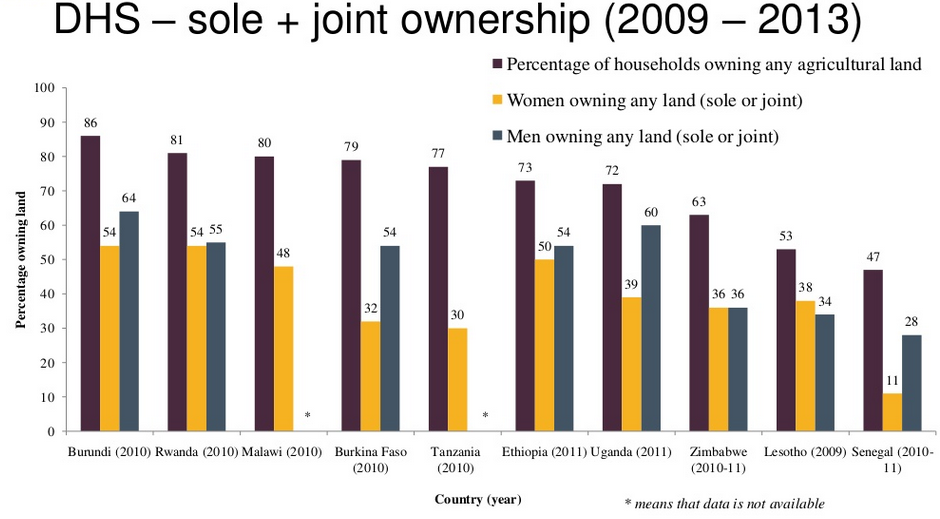 I am guilty of having quoted the line – “African women farmers grow 80% of the food while owning only 1% of the land.

It turns out that neither of those numbers is backed up by any evidence — and, in fact, the lack of accurate data is a huge challenge. The women pictured above – some of the world’s top feminist scholars – are working to fill the evidence gaps. On November 22, 2013 they briefed us on their progress in a presentation at IFPRI which you can find here on the web, with audio and slides.

Gender discrimination in women’s access to productive assets is very real, and varies tremendously from country to country — although nowhere as extreme as one percent. Terri Raney of FAO headed up the historic 2011 SOFA report that concluded that ending gender inequality in access to farm inputs would bring 150 million people out of hunger.

In the IFPRI presentation, Agnes Quisumbing presented new data from a number of African countries on women’s land ownership – both sole and joint ownership. “Women are disadvantaged and often the gap is quite large.” In the FAO land ownership database, the percentage of landowners who are women varies from 50% in Cape Verde to only 3% in Mali.

DHS – the huge regular household survey – now includes questions on sole and joint ownership of land by men and women, and includes several THP countries where the percentage of women owning land varies from 48% in Malawi to 11% in Senegal. The team expects its complete book will be published in the Spring, and we’ll review it.

One response to “Gender Data: Getting It Right”