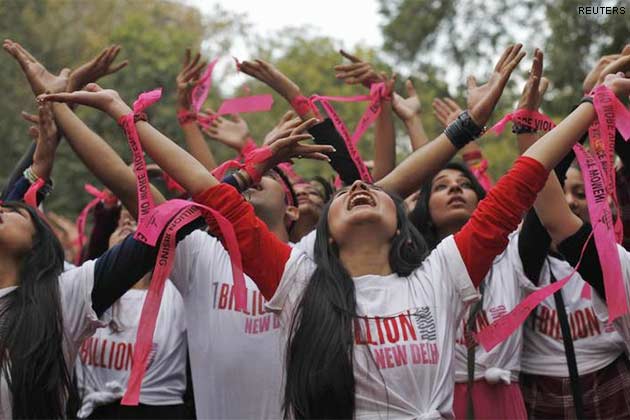 As the MDG deadline approaches and the world debates “bold but practical” post-2015 development goals, what difference did 2013 make? Here are what I’ve seen as the top 10 milestones of 2013 and the important trends they reflect.

Update – January 31, 2014: In our year-end poll, members of our Global Advocacy Team from six countries voted for their top three milestones. There was strong consensus behind the Post-2015 High-Level Panel Report, the Nutrition for Growth Conference and the new World Bank Goals.

1. Post-2015 High-Level Report. In 2012, Ban Ki-moon launched a massively inclusive process to create the post-2015 goals with seemingly impossible mandates: keep them as simple and compelling as the 8 MDGs, but include human rights, good governance and the environment. As a first step, he created a High-Level Panel co-chaired by the British PM and the Indonesian and Liberian presidents – as well as other leaders, scholars and a Tunisian women’s rights street activist. Their recommendations published in June fulfilled the mandate and astonished skeptics – 12 clear goals based on five “transformative shifts.” Click here to read more.

2. World Toilet Day. Seriously? Yes. The UN General Assembly approved this November 19 as the first official observance. Lack of safe sanitation has been called “the blind spot” in India’s high rates of malnutrition by none less than Robert Chambers, and data overall shows that hand washing and better access to clean drinking water could cut stunting by 15% worldwide. Click here to read more. 3. One Billion Rising. The mass demonstrations in India following a fatal gang rape of a New Delhi medical student went global, culminating in an unprecedented mobilization on V-Day – February 14. In India, laws were changed, fast-track courts were established, yet the struggle to end gender-based violence has a long way to go. Click here to read more.

4. Global Fund Replenishment: In December, the world community committed more than US$12 billion for the Global Fund to Fight AIDS, Tuberculosis and Malaria – a 30% increase over the previous replenishment. This is seen as a critical time, when the possibility of an AIDS-free generation may soon be at hand. The head of UNAIDs pointed to “an end of paternalism” and more authentic partnership as African countries pledged their own funds for the first time. Click here to read more.

5. Nutrition For Growth: In June, British Prime Minister David Cameroon organized a global pledging conference on nutrition. It coincided with the launch of an updated Lancet series on maternal and child nutrition, with new data showing that the role of maternal nutrition is twice as important in eliminating stunting as previously thought. Meetings in Washington launched the second 1000 days of international action in support of improving nutrition in the “1000 Day” window, and more countries joined the SUN – Scaling Up Nutrition movement. Click here to read more.

6. Africa Union (AU) End Hunger Commitments. Former President Lula, who led Brazil’s comprehensive and rapid Zero Hunger campaign, established a new partnership with the FAO and the AU at a High Level meeting in July.  Their declaration calls for an end to hunger in Africa by 2025, and launching new initiatives in a first round of four countries: Angola, Ethiopia, Malawi, and Niger. Click here to read the declaration.

7. Commitments by President Obama, Pope Francis. Not since FDR’s Four Freedom’s speech in 1941 has a US president spoken out as strongly for ending world hunger and poverty in a State of the Union Address, as did President Obama in January. On December 10 – Human Rights Day – Pope Francis launched the Catholic Church’s first-ever global campaign to end world hunger by 2025. Click here and here to read more.

8. Right to Food. The world has long agreed that people have a Right to Food, but there have not been laws to enforce that right until now. After a year of high-level national debate and years of civil society campaigns, this September India passed a Right to Food Act, greatly expanding its subsidized food distribution system. Click here for the AP news story.

9. World Bank Targets and Fragile States. The new World Bank President Jim Kim convinced his board to focus the Bank on two targets for the year 2030: Ending Poverty and Shared Prosperity. He defines “Ending Poverty” as bringing it below 3%, “after which you’re dealing with an entirely different phenomenon.” By Shared Prosperity he means that the bottom 40% in every country will see real income growth. He also intends to transform the World Bank back into being the “Go To Agency” for Fragile States, where the majority of the extreme poor now live. Click here to read more.

10. Halting Child Marriage. High profile debates in Yemen and other countries catalyzed a renewed push to halt child marriage – a particularly tragic form of gender-based violence. In 2012, the UN launched a global campaign on the first official observance of the International Day of the Girl Child – and this year WHO, UNFPA and numerous governments and civil society initiative joined. Click here to read more.

US Food Aid Reform: The US provides food aid very inefficiently – moving US grains long distance on slow-moving but expensive US ships. It could feed at least four million more children per year and empower countless small-scale farmers if it would just send cash and purchase locally-produced food. President Obama pushed for the change; however Congress failed to reform the practice in 2013. Click here.

Top Opportunities to Watch in 2014

Here are some important milestones on the calendar that bear watching:

Open Working Group on Sustainable Development Goals: The next phase of negotiations for the Post-2015 agenda rests with this rotating group of national governments meeting thematically in NYC. Their report is due in 2014. Click here.

G20 in Australia: The voice of the G20 is strong in the Open Working Group meetings, so the 2014 G20 will be particularly important. THP can leverage the participation of Lorena Vazquez in the last two G20 meetings in Mexico and Russia (where the first formal Civil Society “C20” forum was held, and the strength of our mighty Australia team.

Africa Union and Maputo+10. In 2003 in the Maputo Declaration, Africa made a bold declaration to take charge of its own agricultural policy, investing 10% of its budget. Only a few countries have fulfilled that pledge so far, although the NEPAD-CAADP mechanism is now in place and is pushing more countries towards that goal. At its January 2014 Summit, leaders are expected to launch an Africa Year of Agriculture – in some ways consistent with the UN Declaration of 2014 as the International Year of Family Farms. Click here to read more.

Resilience. This is definitely the top buzzword in the food security community as more and more countries are affected by recurrent natural disasters. IFPRI is holding their next 2020 Conference in Addis on May 15-17 entitled “Building Resilience for Food and Nutrition Security.” Click here.

National Elections in India and Bangladesh. India, the country with the largest number of hungry people, will have national elections before May, and Bangladesh is expected to have them in January. Polls currently indicate changes in government may occur, with possible shifts to the right. Click here and here.

ICN2: The Second International Conference on Nutrition will be held in Rome from November 19-21, 2014 with Heads of State and Government. The meeting will be jointly organized by the FAO and WHO, and will focus on how to address major nutrition challenges. THP attended ICN1 in Rome in 1992. Click here.