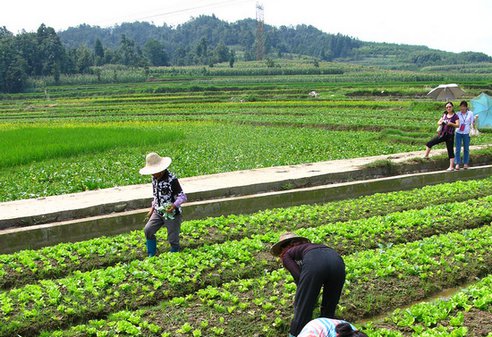 Agriculture has been the dominant employer of the global working labor force, the highest contributor of the global gross domestic product (GDP) and provider of food for all of us to sustain. Over the past two decades, manufacturing and other industries overtook agriculture as a dominant sector of the economy, especially in the global North. While this article is not about history of agriculture and industrialization, it discusses about the importance promoting climate resilient sustainable agriculture centered around small scale farmers (Chung & Billingsley,2013).  The experiences of the United States, European Union and developed Asian countries on their transition from small scale farming to commercial agriculture and eventually to manufacturing and service industry is a basis for suggestions and recommendations given. Africa as a continent though not as populous as Asian countries such as China and India,  it  will be the center of this discussion as majority of its population depend on traditional and rain-fed small scale farming earning less than $2/day. Of the global 7.1 billion population, 852 million hungry people live in developing countries (FAO, 2012). Thus, investing in small scale agriculture and centering development policies around this important sector addresses hunger, and it also helps reduce the countless problems associated with poverty such as malnutrition, unemployment, conflicts and diseases such as HIV/AIDS, tuberculosis, malaria, polio and etc. Moreover, economically well-off communities can afford to pay for services, goods and provide their families without aid in a sustainable way.

Small scale farmers lead the global food production and most of them live in developing countries of Africa, Asia and L. America. Studies by (Chung & Billingsley, 2013) show that climate resilient sustainable agriculture (CRSA) is the way to go to bring about food security, agricultural development, eradicate poverty and succeed in environmental mitigation and adaptation. According to the , (Chung & Billingsley, 2013) unlike large scale commercial farming, CRSA that centered around small scale farming provide better alternative to soil conservation, agro-biodiversity, water management, livelihood diversification, allows multi-cropping, promote local ownership and gender inclusion (Chung & Billingsley, 2013). One good example of the effect of commercial agriculture on the environment is the clearing of naturally forest covered areas of Gambella and Southern regions of Ethiopia. With little to no environmental regulations to preserve the ecosystem in the host country Ethiopia, Middle Eastern and Indian farmers are clearing the forests leading to the loss of thousands of species of trees and animal habitat. In American countries such as Guatemala and Colombia, native Indians were forced of their homes and lands violently to clear away for crop production and plantation by local elites and foreign companies who export the products to the U.S. and Europe. “Afro-Colombian and Mestizo communities in Curvaradó and Jiguamiandó, in the Lower Atrato region of Choco, have resisted invasion and land grabbing for generations. The communities, dependent for their livelihoods on shifting food production and livestock grazing, as well as for hunting and fishing, have suffered from counter-insurgency, paramilitary violence, and encroachment on their territories by banana and oil palm agribusinesses, logging and mining companies, cattle ranchers, and drug-traffickers” (Franco et al, 2012). Similar developments have been taking place in many countries of South Asia and Africa. Among the examples are the 30,000 hectares acquired in Nigeria by US Company Dominion Farms in 2011 for rice, a 200,000 ha acquired in Ethiopia by Karuturi India and Emami  Biotech,  and 60,000 hectares acquired in Cambodia by local businessman-politician Ly Yong Phat in 2006 for sugarcane (Franco et al, 2012).

Commercial Agriculture is not Sustainable Solution to Hunger and Poverty

There is a huge misconception on how to go about agricultural development and food security in developing countries. For some, commercial farming is the way to increase agricultural output and income. This is a myth and not cognizant of the real situation on the ground at least in sub-Saharan Africa. As mentioned above, small scale farming employs the majority of farmers and produces most of the food we consume. On the other hand,  the commercial farmers  produce crops that are destined for export to foreign countries while locals experience hunger and face forced evictions. The second misunderstanding among those who advocate for commercialization of agriculture in the global south is that what commercial farmers usually produce do not constitute what locals eat or need. This is true of foreign companies in Africa. For instance, Karuturi and Emami Biotech leased 200, 000 ha of forest covered land combined in Ethiopia by displacing thousands of indigenous tribal population to produce palm oil, jatropha, rice, maize, sugarcane and edible oil seeds. These agricultural products neither make up what majority Ethiopians eat nor have demand at the local markets to ease hunger problems (Oakland Institute, 2012).

In order to scale up climate resilient sustainable agriculture (CRSA) ActionAid recommends that ‘agricultural systems, policies, and practices must be transformed’ (Chung & Billingsley, 2012). The following are lists of initiatives national governments together with international donors and CSOs should embark to scale up CRSA:

Studies show that there is a huge potential for agricultural investment in developing countries of Africa, Asia and Latin America. Of the total global arable land, 60% is located in Africa which could be taken advantage-off by increasing the local capacity of small scale farmers and designing sustainable policies that promote climate resilient sustainable agriculture.  Effective policies that foster small scale farming are crucial to increasing agricultural output, eradicating hunger and the multifaceted problems that come with poverty. Leaders of developing countries especially those in sub-Saharan Africa should design climate resilient agricultural policies and follow a bottom up development approaches that empower small-scale farmers. Leaders of these developing countries should also be cognizant of predatory investors who are swarming their countries for arable land either to export-back products to their home countries or produce crops for bio-fuel in the name of green technology. Promoting commercialization of agriculture and deals with corrupt and cash-strapped dictators only favors the elites and the already rich. Due to the prevalence of corruption and bad governance, the benefit from the investment is less likely to reach the majority poor. In order to modernize the agriculture, ensure food security and improve the livelihood of the of people who depend on agriculture, government should work around the small scale farmers. Governments in developing countries should invest in small scale farmers and work with civil society and multilateral organization in the sector. Providing training,  micro-financing, investment in value chain, empowering women and construction of infrastructures (roads,dams and irrigation canals)  if coupled with sound environmental policy, can lead to a sustainable development and economic growth. International financial institutions and donor governments such as the World Bank, IMF, FAO, EU, China and India should recognize the importance of investing in small scale farmers and refrain from financing commercial farmers engaged in food-for-export and bio-fuel trading at the cost of locals.

investment and international land deals in Africa. Retrieved on December 10, 2013 from http://dlc.dlib.indiana.edu/dlc/bitstream/handle/10535/6178/land%20grab%20or%20dev %20opportunity.pdf?sequence=1

Moyo, D. (2012). Winner take all: China’s race for resources and what it means for the world. New York: Basic Books.

Wave of Investments in Land. Retrieved on December 9, 2013 from http://www.oxfam.org/sites/www.oxfam.org/files/bp151-land-power-rights-acquisitions- 220911-en.pdf