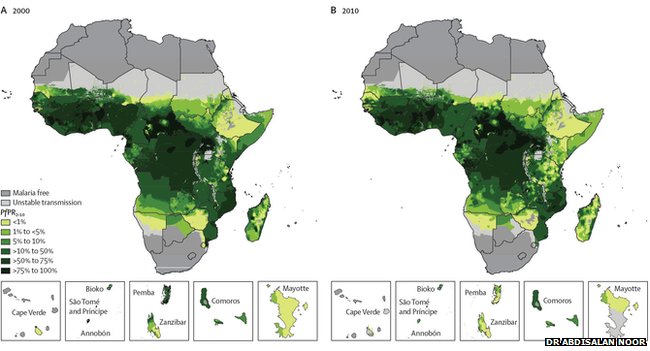 A KEMRI-Wellcome Trust research team led by Dr. Abdisalan Noor and Professor Robert Snow have recently produced malaria maps by geocoding data from surveys in 44 African countries and territories endemic for malaria in order to identify which populations were at risk of the disease in 2000 and 2010. According to the findings by the research team, ten countries in Sub-Saharan Africa including Nigeria, Democratic Republic of Congo, Uganda, Ivory Coast, Mozambique, Burkina Faso, Ghana, Mali, Guinea, and Togo together account for 87.1 percent of areas that have the highest prevalence of malaria. Democratic Republic of Congo and Nigeria (2013) have some of the highest malaria prevalence and 40% malaria deaths in Africa. (Noor et al, 2014, RBM, 2013).

To download and read a publication by The Lancet Medical Journal on malaria infection in Africa, click here.

The Global Partnership for a Malaria Free World’s Roll Back Malaria (RBM), the Millennium Development Goals (MDGs), the World Health Assembly  and many other initiatives have helped reduce malaria related deaths and infections over the past several years. Despite substantial reductions in malaria transmission that have been achieved in endemic countries of Africa over the 2000 – 2010 period, more than 184 million people still live in extremely high-risk areas. Fifty seven percent of the population in 2010 continued to live in areas where transmission remains moderate to intense and global support to sustain and accelerate the reduction of transmission must remain a priority. (Noor et al, 2014, p. 8).

Key Malaria Facts (according to RBM):

Required Health Expenditure: USD 5.1 billion every year. In 2012, the global total of international and domestic funding for malaria was US$ 2.5 billion

Economic Cost : USD 12 billion per year in direct losses, a lost 1.3% of GDP growth per year in Africa