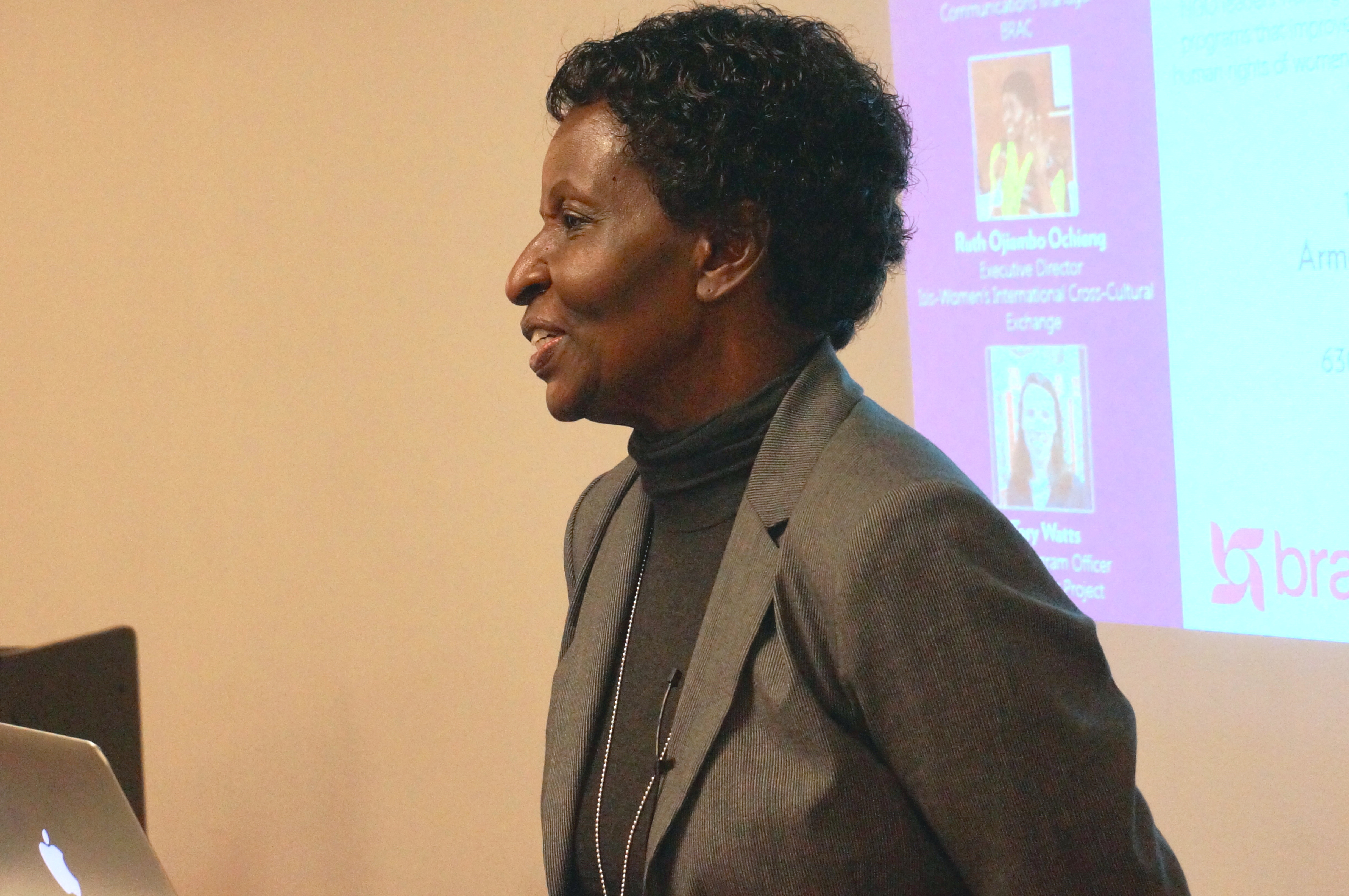 Isis-WICCE Model on Comprehensive access to Healing and development Editor’s note: THP organized a parallel event on the opening day of the 58th Session of the UN Commission on the Status of Women, co-sponsored by the Center for Health and Gender Equality (CHANGE) and BRAC. What follows is the presentation by Ruth Ochieng, brought here by CHANGE.

As you all know, Peace and security was not one of the MDG Goals, neither did the agenda recognize gender based violence as one of the underlying causes of gender inequality and discrimination, especially among the vulnerable and the minority. As a result, challenges of many survivors of armed conflict especially women, who experience rape and sexual violence have had no direct concrete policies or mechanism to improve their well being. Even the DDRR or the peace and rehabilitation development plans that nations implement, that are specifically meant to address the concerns of those affected by the conflicts (from fighters to civilians), have continued to marginalize sexual violence in particular, as a priority aspect that needs immediate intervention. This has been a reality in many countries where Isis-WICCE has worked namely; Uganda, Liberia, DRC, South Sudan, even in western Kenya after the political crisis, Nepal and Kashmir in India, where war is silently affecting many women’s bodies, mind and spirits.

Whereas in addressing goal 1 to 8 one could argue that it is one way of bringing peace and security to an individual and in communities as a whole, the goals were not explicit to the needs that are unique to survivors of rape and sexual violence in conflict settings. I will give you a short scenario;

While documenting the experiences of women in conflict settings, I met a woman liberator who put her life on the front line to fight injustice, and give good governance a chance in her country. While she successfully commanded her troops, the male counterpart did not relate to her as a comrade in the struggle but as a sex object. She shared with me how her superiors would force her into sex in her own words “they raped me several times”. Out of the rapes she conceived two children…. 10 years later she was on her own …she was told “the war is over, you can now go back to your gender roles…..she left with her 2 children…At the time we met her she had nothing to feed her children, she had no income she was emaciated as her children too were malnourished. The first call she made to us was please get something for my kids….they have not eaten anything since morning…it was 4 pm when we talked to her. At that time the DDR process was going on in her country, a mechanism specifically catered for combatants. Her case would have been intervened by the first 6 goals of the MDGs, but she was not able to access any, neither did the mechanism at national level reach out to her numerous needs;  This is a story of millions of women and girls survivors of wars. Instead she was given a package of $300, a mattress and some seeds. The package did not recognize the two children in its system.

Our 18 years of documenting the voices of women affected by wars, particularly rape and sexual violence survivors reflect huge magnitude of health complications that have not been taken care of. In Uganda for example where we have documented and worked with over 15,000 survivors, more than 35% of these reported to have been raped, 45% reported to have experienced other physical attacks that targeted their physical and sexual organs, which resulted to fistula, prolapsed of the Uterus, chronic illnesses such as STDs and HIV/ADs and for other this resulted in cervical cancer among others health complications.  In the countries where we have documented survivors, 70% of the violation led to different levels of trauma.

The lessons we have learnt over the years point to the fact that the available mechanisms ( such as MDGs, UNSCR 1325, DDRR  processes the national constitutions), continue to marginalize SRHR of women and girls when we all know that it is extremely difficult in circumstances as explained above to engage in any form of productive activity, including being part of any decision making processes. Therefore it is impossible to imagine that communities whose infrastructure is destroyed, and individual special needs such as those explained above are not taken care of, can realize any given target among the Millennium Development Goals.

This prompted Isis-WICCE since 1997, to endeavor and bridges some of the gaps through its multiple innovations that have focused on the healing of body, mind and spirit, especially survivors of sexual violence in conflict setting, in order for survivors to become productive and developmental.

Research among the survivors helped us to establishing the extent of the problem, and the kind of needs to solve the bigger problem. Isis-WICCE then undertakes strategic partnerships with health workers, government institutions and women activists’ at village levels to carry out healing camps among the survivors in the affected rural settings. The interventions include a range of services such as collecting data on the individual health complications, (which forms yet another set of knowledge for further analysis); treatment, surgery particularly for those with reproductive complications, and counseling for those identified to have mental illness. The strategy has a component of referral in appropriate institutions (especially mental health), for long term healing. This healing process is the first step to activate their re-entry into the active spaces and become effective actors in development.

Skills building; after the healing process, Isis-WICCE conducts skills building programs for the survivors and the women leaders in their communities. They are introduced to a range of programs and training that is meant to expand their horizon and understanding of their political environment, peace building processes and engaging the governance processes to implement their commitments. Today a number of these survivors have been the force of change and peace building in many communities.

Experience has shown us that with the healing and skills acquired, many survivors are finally able to reclaim their esteem and dignity. They start to engage and become active citizens. Many of the survivors have moved on to run for elective political offices and challenge the status quo. We have seen this happen in all the countries we have worked in. In Uganda for example, survivors have formed community based organisations that are presently addressing all the MDGs at village levels, using the knowledge, available natural resources and the human capital of course with the limited financial support received from different actors. The trained women have moved to the next level, where they have been supported by Isis-WICCE to engage the local leadership. They started what is called a Peace Exposition, an annual platform where the women mobilized survivors of conflict to interface directly with their leaders, to challenge them on the gender gaps in the implementation agendas, as well as learn from one another critical issues affecting their well being, such as the climate change, food security, insecurity in their communities, rights of women, ending sexual violence against women and girls, engaging male youth and men, among others.

Isis-WICCE has continued to use this platform to provide women, men, and the youth in these communities access to quality services such as screening of cervical cancer, HIV/AIDs, STD, and STIs from qualified health worker, whom many of such communities cannot access. From the past 4 peace expositions we have held in Uganda rural districts of Soroti, Kasese, Lira and Karamoja (all affected by conflict), health workers have been able in a month of the peace exposition in each of the districts to screen over 3,000 women and men, girls and boy each year. Every year, between 50 and 100 women and girls have been found to have cancer of the cervices, some at the early stage but others at a very advanced stage. All are provided with appropriate information and referral for their next service in the nearest hospital, where the local health team takes charge of the next process.  Many of the survivors have indicated that without the peace exposition they would not have known their status. However, the ill stocked hospitals (human and drugs), has left many not to access the needed services in time, leaving them with no option but to wait for death!

Some of our alumni who are also  part of the Women Task Force to monitor the government implementation of the peace and recovery programs have continued to demand for good quality health services, including reduction of child mortality, improved maternal heath, combating HIV/AIDs, as well as reminding government about other health complications among survivors of armed conflict, which are not directly part of the MDGs Agenda, which have also not been prioritirized by the peace and recovery and development plan (PRDP). This has left huge gaps in the achievements of the MDGs, especially for quality health services for women and girls survivors of armed conflict.

Although collectively governments and other stakeholders have provided some successes in bridging the gender gap in taking commitments to fight HIV/AIDs; improving maternal health, address poverty, provide access to education for all, more women taking up decision making positions; There are still numerous gaps in providing comprehensive access to health services to survivors of sexual violence, including care to address the long term consequences of sexual violence in conflict, such as caring for children born out of rape, pregnancies after rape and trauma.

Another gap the survivors have identified is the narrow focus of the agenda on promoting gender equality and empowerment of women, where the component of education is only targeting the mainstream education for girls and boys and leaving out adults (especially women who have for decades been marginalized in this area), who lost the opportunity because of the long conflicts. Communities need a diverse spectrum of education, such understanding the pattern of weather, climate change, nutrition, leadership and governance, and rights in general. This lack of enhancing adults with appropriate knowledge for relevant interventions, has left many survivors of conflict extremely poor, sick an informed, and therefore cannot effectively participate in the development agenda.

The failure for the MDGs to recognize the impact of violence against women and particularly sexual violence is a fundamental gap for any country to achieve the MDGs. About two weeks ago, the European Union released its biggest survey ever among all EU states that still reveal that about a third of women in the EU have experienced some form of sexual violence. If this can happen to EU, where some systems and people centered policies are in place, what do we expect to find in countries hit by crisis?  This is a clear manifestation that the implementation of the MDGs have not resolved one of the most devastating violations in the history of human kind, and that The MDGs continue to fail to connect with the holistic needs of women survivors of sexual violence, especially in conflict settings, making it unable for half of the population to be part of this development agenda, hence leaving many countries unable to achieve their expectations.

As the world prepare to launch the new Agenda (+2015), we have observed that real peace and development can only happen if individuals are at peace with themselves. Therefore, the Post 2015 framework therefore should focus on;

Thank you for Listening.