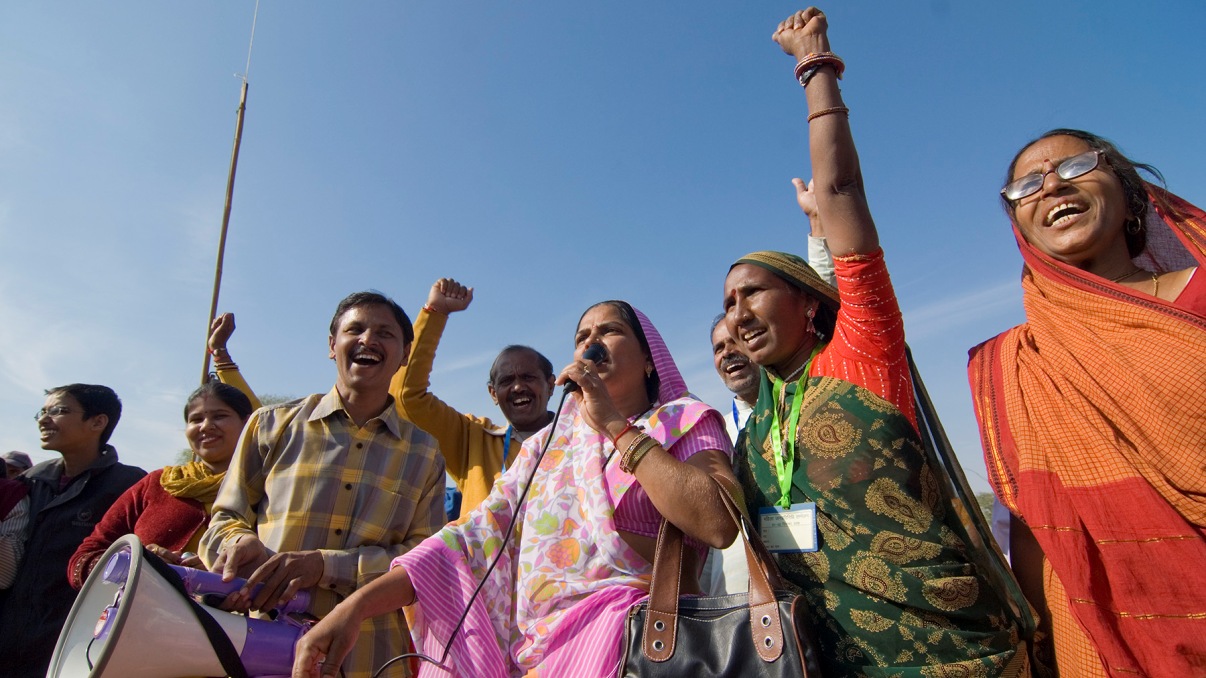 In inviting us to “rethink world hunger,” THP asks us to recognize that ending hunger requires us to (1) start with women, (2) mobilize everyone, and (3) engage government.

But what does this mean? As some would say – isn’t this just asking for trouble? Aren’t governments just hopelessly corrupt at worst and unworkable at best?

Engaging government is a challenge, but it’s the right challenge — particularly at the local level. Responsive, participatory, inclusive local governance represents the only sustainable, universally available pathway through which grassroots people can take charge of their own development.

When it comes to ending hunger, all politics is local. Issues of primary health and education, water and sanitation, farm productivity, natural resource management and protecting women’s rights can only be solved at the local level. Upper levels of government must create an enabling environment in which this bottom-up approach can succeed.

To address this challenge, THP takes the following steps.

1) Strengthen the Demand Side. As THP mobilizes people and empowers women, it has them realize their rights, and transforms their mindset from being the “subjects” that are dependent on government, to being “citizens” to whom government must be accountable. People, and particularly women, learn that they have rights, and that their government has resources that should rightfully be reaching them. We support people in building their own associations through which they can negotiate effectively with government — “ok, if we build a clinic, will you send us a nurse and pharmaceuticals?”

This approach is increasingly known as Social Accountability. THP is a member of the World Bank’s Global Partnership on Social Accountability and helps mobilize people’s direct participation in public forums for social accountability (mechanisms which, although mandated by law, are often never held in reality.) We also work with the media to publicize the success stories that arise from effective bottom-up partnerships between people and their local governments.

2) Advocate for greater decentralization and investment in local capacity. In developed countries, local-level governments control 20% or more of public resources; in the poorest countries they may only control 2%. THP has witnessed a night-and-day improvement in the ability of people to access public resources when governments began decentralizing from the capital to the district level in the 1990s.

Countries that move government even closer to the people do even better. Countries like Ethiopia, Niger and Brazil have made dramatic progress in ending hunger by recognizing the power of communities to solve their own problems, and carrying out massive campaigns to put trained health, agriculture and nutrition workers in nearly every village.

THP believes there must be strong, well-resourced, democratically accountable local government basic services within 10km (6mi) of a person – the distance that a woman with a baby on her back can walk to reach them. Given the multiple burdens women must face, these services should be co-located wherever possible, allowing get a pre-natal checkup, do banking, access child daycare and take a literacy course all in one trip. We are demonstrating the power of this approach at our Africa epicenters, and in all the communities where we work.

Decentralization goes against the grain of the bureaucratic mindset, so it takes strong, sustained advocacy to make decentralization happen. THP has helped reform local government laws in Bangladesh and India, has helped push for participatory local governance to be included in the UN Post-2015 Sustainable Development Goals, and has a partnership with the UN Democracy Fund to build a global movement for improving local governance (see http://localdemocracy.net).

3) Build Local Government Capacity. The traditional patriarchal mindset that has people feel like subjects also has government representatives feel like rulers, and this must change. In various places, THP directly provides transformative training to elected local government representatives and staff to transform their mindset from “ruler” to “public servant”  to truly understand and appreciate the value and power of community-led development. THP equips local officials with basic information on their powers and responsibilities – as we’ve done with more than 100,000 elected women leaders in India. We help communities build effective, gender-balanced and participatory committees for health, education, agriculture and social justice.

THP also makes it easier for local governments to succeed through social mobilization. For example, imagine you are a district veterinary officer contemplating how to serve 2,000 random goat herders spread across the desert. THP organizes these goat herders to meet you at a specific time and place.

THP’s engagement with government is working. People are gaining control over their own lives and destines, and are transforming unworkable, ineffective rural governments into models of people-centered partnership. Upper tiers of government are seeing the advantages in terms of development effectiveness by supporting – rather than suppressing – bottom-up initiative. THP is not alone in this growing movement, and is working at all levels, in partnership with others, to exert leadership to accelerate progress towards a future of participatory local governance for all.