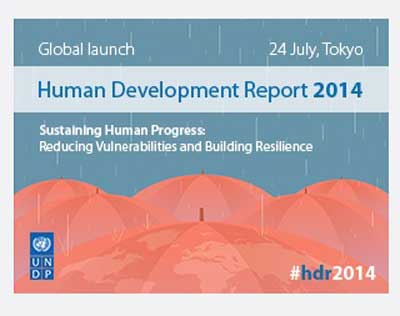 Since 1990, United Nations Development Programme (UNDP) has been publishing an annual Human Development Report. The latest report from July 2014, “Sustaining Human Progress: Reducing Vulnerabilities and Building Resilience”, focuses on the question of today’s precariousness. Although an improvement of human development in most countries can be observed – due to advanced technology, education or income – “a widespread sense of precariousness” still exists. Natural or human-induced disasters or crises can eventually undermine the existing efforts and achievements.

Every society is confronted with risks and precariousness, however, not all communities are affected the same way; nor does every group recover in the same time. The 2014 report tackles this issue and, for the first time, analyzes “vulnerability and resilience through a human development lens.” It gives different recommendations on how to address vulnerability and strengthen resilience to future shocks.

The report follows a holistic and people-centered approach. It presents the risk factors which influence human development, and at the same time points out different ways to strengthen resilience relating to these factors. By taking a people-centred approach, the report puts people in the center of the analysis. It considers disparities in and between countries, focuses on the context of inequality of people and its broader causes, and thereby “identifies the ‘structurally vulnerable’ groups of people who are more vulnerable than others by virtue of their history or of their unequal treatment by the rest of society.”

Furthermore, the report takes a “life cycle approach” – it takes into account the fact that people of different ages are confronted with different risks, and that these vulnerabilities change during their lives. Some periods are especially important, such as the first 1000 days of life, and setbacks at this point can be difficult to overcome and may have long lasting impacts. Capabilities to deal with risks and vulnerabilities are built over a lifetime and need constant investment.

Most Vulnerable Groups and The Multidimensional Poverty Index

Among the most vulnerable are people living in extreme poverty and deprivation. The report uses a Multidimensional Poverty Index in order to measure multidimensional poverty, which includes deprivations at the household level in education, health and standard of living.

Some of the report’s findings include the following:

People suffering under a lack of core capabilities, such as education or health, and whose choices are restricted due to social barriers or other exclusionary practices often find it harder to deal with threats. Those barriers also often hinder them to invest in further life capabilities. That in turn challenges them to deal with vulnerabilities at other stages of life and leads to an increase in their vulnerabilities.

The report gives six recommendations to strengthen and build resilience to risks and future shocks.

The following table presents a selection of findings of the Multidimensional Poverty Index from The Hunger Project’s program countries. The complete data (p. 180ff.) as well as the data for the further indices can be found here.

Both the report and a summary are available in different languages and can be downloaded here.