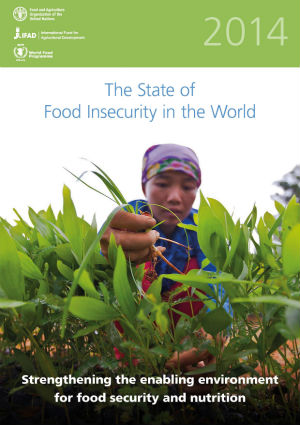 United Nations‘ 2014 State of Food Insecurity in the World (SOFI 2014) Report confirmed that there are still 805 million people – more than half of whom are in Asia – suffering from chronic malnourishment.This report is published annually by the Food and Agriculture Organization (FAO), the International Fund for Agricultural Development (IFAD) and the World Food Programme (WFP). According to the report, one in nine people are severely undernourished; in Sub Saharan Africa the ratio is higher at more than one in four.

However, the report notes that there has been a decrease in the number of people suffering from chronic undernourishment by 200 million since 1992. Most progress has been made in Latin America and the Caribbean Islands, whereas Oceania has made only modest improvement. Overall, this indicates a positive trend in the fight against hunger.

The report states, “to date, 63 developing countries have reached the MDGs target for hunger, and six more are on track to reach it by 2015.” Halving the proportion of undernourished people by 2015 might be possible if measures are fueled up.

The complex nature of food insecurity requires a multi sectoral approach that engages CSOs, and public and private organizations. The report recommends an “enabling environment and an integrated approach.” Specifically, the following should leverage combined public and private investments:

Lastly, the report also stresses the fundamental importance of nutrition programs to address micronutrient deficiencies of mothers and children under five.

Further discussion will be held on the findings of the report by governments, civil society, and private sector representatives at the 13-18 October meetings of the Committee on World Food Security at FAO headquarters in Rome. The Hunger Project is among the organizations taking part in the meetings.