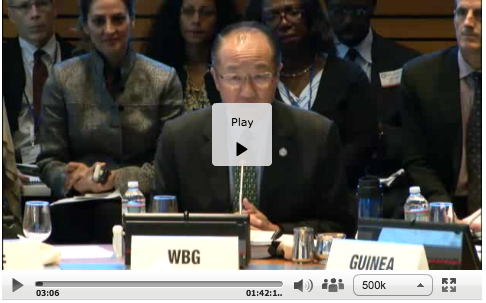 At the 2014 Annual Meetings of the World Bank and IMF, President Jim Yong Kim led world leaders in forging a far-more urgent and specific consensus on what to do to halt the Ebola epidemic in the three affected countries, put in place a sustainable public health care system in those countries, and kick-start their now-stalled but recently very dynamic and high-growth economies. The presidents of the three affected countries – Liberia, Sierra Leone and Guinea – all participated in the conference and – in their very brief statements – responded to the earlier recommendation of Jim Kim: that they not focus on the economics or on what seems political feasible – instead, they should know precisely what is need to bring the highest standard of treatment to all those affected. The presidents did so, with great specificity, and it appeared that the donors are ready to ensure it happens.

I strongly recommend you watch this video—not only for the important commitments made by agencies and governments—but as a one of the best examples I’ve ever witnessed of the kind of meetings we need to have on a full range of issues, at every level of society.