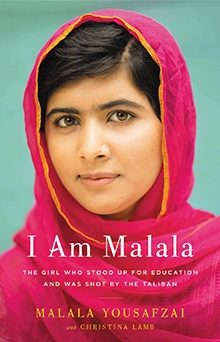 On November 13, 2014, the George Washington University’s Global Women’s Institute launched I Am Malala: A Resource Guide for Educators in Washington, DC. The event included keynote speaker Ziauddin Yousafzai, the father of 17-year-old Nobel Peace Prize Winner Malala Yousafzai and a co-founder and chairperson of the Malala Fund. Malala and her father are Pakistani activists for girls’ education and human rights, and their cause was propelled to the international stage after Malala was shot in the face by a Taliban gunman in 2012 for openly supporting education for girls. When asked recently if she considered herself a feminist, Malala responded, “If feminism means equality for all people, then yes, I am a feminist.”

There were two panels at the launch, which included prominent guests such as Catherine Russell, US Ambassador-at-Large for Global Women’s Issues, Ahmad Shah, the founder and president of the Global Peace Council Pakistan (GPCP), Jahan Zeb, an advisor to the chair of the Malala Fund and a member of the UN Inter-Agency Network on Youth Participation in Peacebuilding, several George Washington University professors, and a George Washington University first year student.

I Am Malala: A Resource Guide for Educators is a free, online teaching guide targeted at high school, college, and university students both in the United States and internationally. Its purpose is to highlight and explain complex issues of politics, history, religion, and human rights by using lessons based on eight different themes from Malala Yousafzai’s memoir I Am Malala. This project was created through collaboration between the George Washington University’s Global Women’s Institute, Little, Brown and Company, and the Malala Fund.

In Mr. Yousafzai’s keynote address, he emphasized the pressing need for international advocacy and efforts for girls’ education. He argued that men’s involvement is crucial in changing social norms and oppressive practices towards women in patriarchal societies. He further advocated for fathers and brothers to lead this effort, stating that “some say you need courage to speak out. I say you are a coward not to speak out.” Mr. Yousafzai praised the resource guide for its ability to connect people around the world across the divisions of North, South, East, and West communities. He insisted that the book does not have political agenda, and is only to spread “the love of humanity” through Malala’s story.

The first panel with Ambassador Russell and Mr. Yousafzai focused on the policy challenges of ensuring quality education for girls worldwide. Ambassador Russell argued for a holistic approach to these obstacles, which include the safety of girls while attending school, traditional social attitudes towards girls’ education, child marriage, inadequate school facilities and resources, and various other context-specific concerns. Mr. Yousafzai and Ambassador Russell both pushed for a focus on women and girls’ empowerment efforts in conflict zones, where these challenges are intensified. Mr. Yousafzai and Ambassador Russell also emphasized the value that empowered and educated women provide to their societies because they are able to contribute monetarily to their families. Lastly, the Ambassador stated President Obama’s commitment to education for girls worldwide and highlighted that girls’ education and freedom from forced marriage not only create more vibrant, stable states, but are also internationally recognized human rights.

The second panel described the details of the resource guide and its purpose in classrooms. The authors of the guide hope that Malala’s story will fuel a broader movement for girls’ education and empowerment, and that it will foster further dialogue between the youth in Western and developing countries. Mr. Yousafzai cautioned that this movement must focus on ensuring quality education; he highlighted how easily education can be manipulated to allow indoctrination, using the Taliban as an example. However with quality education, “nations can do anything.” Overall the panelists expressed optimism in the launch of the resource guide and in transforming Malala’s story from a media phenomenon into an effective and powerful international development tool for human rights.

You can learn more about the resource guide here!