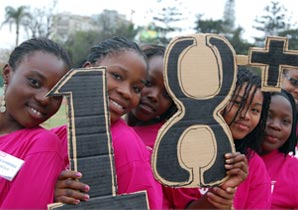 Child marriage is a human rights violation. Until recently, Malawi was labelled as one of the world’s countries with the highest child marriage rate. The UN Population Fund reports that Malawi has the seventh highest rate of child marriage in the world with half of all girls married before their eighteenth birthday, and nearly one in eight married by age fifteen. According to the World Health Organization, teenage pregnancy accounts for 20 to 30 percent of maternal deaths in Malawi.

The government of Malawi has finally decided to end child marriage by passing the Divorce, Marriage, and Family Relations Bill. This bill increases the legal age of marriage in Malawi to eighteen and now gives civil society organizations a new advocacy tool to protect girls in the country.

The adoption of the new Divorce, Marriage and Family Relations Bill in Malawi is a good news for The Hunger Project. The Hunger Project has been working to stop child marriage in Malawi in particular and in all its program countries in general. Animators throughout our programs run awareness campaigns to put an end to child marriage, violence against girls and other discriminatory practices like dowry and female genital mutilation.

In Bangladesh for example  The Hunger Project trains and empowers teams of women leaders, who are able to reach women secluded in their households with education on basic rights, and on halting child marriage.The Hunger Project also catalyzed the formation of a 300-organization alliance that honors National Girl Child Day in Bangladesh, a day to focus on eradicating all forms of discrimination against girl children, each September.

With the adoption of the Divorce, Marriage and Family Relations Bill in Malawi there are only three Hunger Project program countries remaining (Burkina Faso, Senegal, and Peru) where the legal minimum age for girls’ marriage is less than 18, and as of today none of these three countries is considering a policy change on child marriage.

The Hunger Project will continue to intensify its advocacy efforts for the elimination of child marriage in Burkina Faso, Senegal, and Peru. Child marriage is a bad practice and should be eradicated because it poses severe education and health risks on girls. In parts of Sub-Saharan Africa and South Asia, child marriage has been shown to lower the likelihood that girls will achieve literacy.  Girls aged fifteen to nineteen are twice as likely to die from causes related to pregnancy or childbirth than women in their twenties, and girls under age fifteen are five times more likely to die.

The Divorce, Marriage, and Family Relations Bill will reduce maternal death in Malawi, contribute to healthier families and improve the education of Malawian girls. Healthier and better educated Malawian girls will be able to  achieve their potential and fully contribute to economic growth of Malawi.