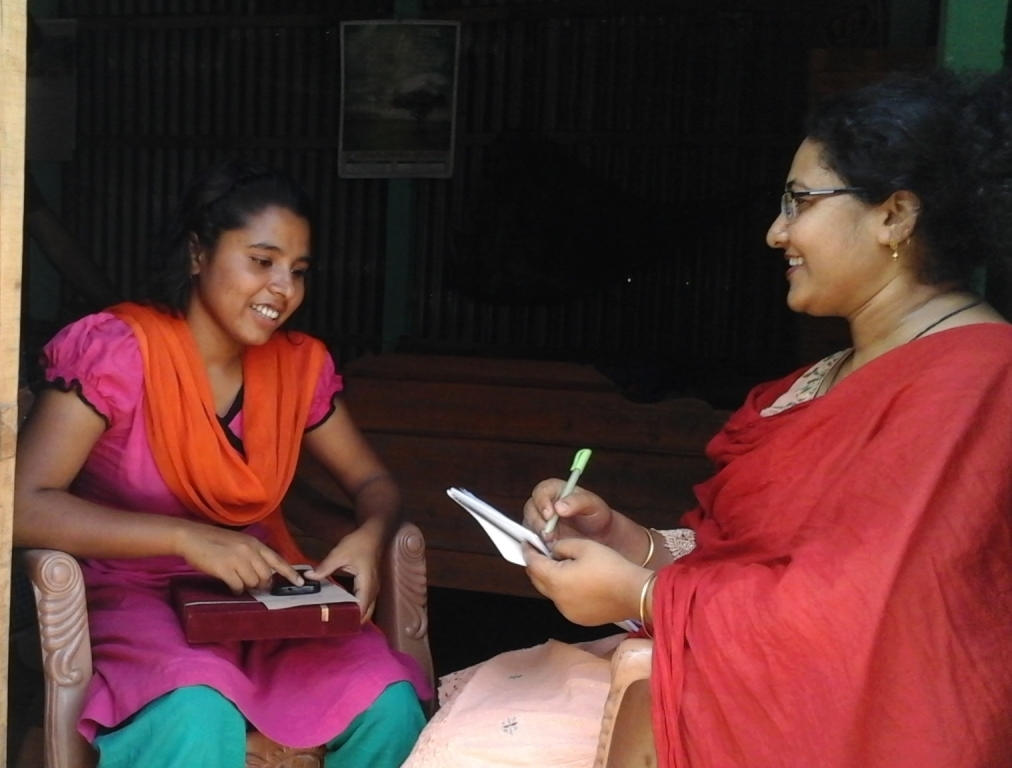 Ruma is the first born of a lower income peasant family, still living with her parents in Udampur Barni in Hemanagar in Gopalpur under Tangaail. After passing primary school, she qualified for admission into high school. Her days passed as they should: playing and studying. This soon took a turn when she was in class eight.

Convinced by neighbors and close relatives, her parents decided to marry her off at her early age. Hearing the news, she became upset and worried about her future; she was not ready to marry. She talked with her parents to give her decision that she would not marry. Surprisingly, it was her mother that was difficult to convince. She persisted and her parents finally decided not to marry her off. She was able to escape from the curse of early marriage.

She passed SSC in 2010 and her parents tried again to marry her off, but failed. She started to earn her own school tuition, relieving her family of extra financial burdens. She then got admitted into college. Sadly, however, she failed to protest her younger sister’s early marriage. Her parents married her off when she was only a student in class seven. New burden arose in her home: why did her younger sister marry before her? It was at this time that her uncle learned about The Hunger Project’s Animator Training from Union Coordinator Biplob.  She joined her uncle in attending the four days of training in 2013.

After training, Ruma’s brain was busy with how she can do something special for herself as well as for her family. She decided to rear poultry. She bought three hens from the local market. Within a few days she added 30 chickens and eight ducks. She began to earn Tk. 3000-4000 ($39 – 51) per month from poultry farming. She also attended a three-day Residential Women Leaders Foundation course in 2014. She learned know about gender discrimination, violation and women’s empowerment. Mainly this training enabled her to realize herself as human, not just woman. With the other women in the course, she took an oath declaring herself as a woman leader. As a woman leader, she began to take initiatives. She held courtyard meetings for pregnant women about maternity and child nutrition and lead campaigns on sanitation, woman violence and gender discrimination, birth registration, and dowry. She also conducted five courtyard meetings on child marriage, two on school dropouts, five on violence against women (VAW), two campaigns on school enrollment and three discussions on sanitation. Presently, she monthly earns Tk. 3000 ($39) from meeting tuition, TK. 1500 ($19) from homestead gardening and Tk. 1000 ($13) from poultry rearing.

Most importantly, people’s acceptance of and respect for Ruma increased as a result of her leadership in these activities and economic independence, because she involves herself with what is good for the society. She was awarded “Joyeeta” on 9 December 2014 in recognition of her work.

Now, Ruma is a studying for a degree and is married to a man of a financially sound family. She dreams to be a teacher and dreams of a good and prosperous society. She believes that her perseverance through any ill-thinking and gender discrimination in society will lead to its elimination. Toward this end, she plans to recruit another 20 women leaders within the next two years. It is through dreams and actions like Ruma’s that a hunger-free, poverty-free and self-reliant Bangladesh will be built.

2 responses to “Ruma: an insuperable woman against early marriage and poverty”