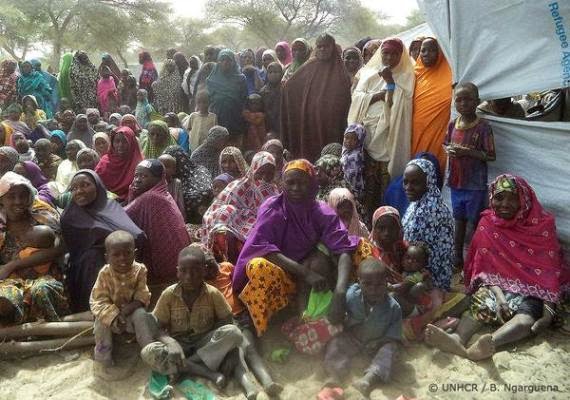 As Nigeria continues to fight the islamic extremist group Boko Haram, a humanitarian crisis is looming in the Far North region of Cameroon. In the far north, Cameroon shares one of its longest borders with Nigeria, which has now become very insecure because of frequent transboundary attacks by Boko Haram militants.Since the beginning of this terrorist group’s activities in Nigeria, most of the villages near this border have been deserted, causing massive internal displacements of populations.Thousands have also crossed this border to seek refuge in Cameroon.

The Far North Cameroon is densely populated and predominantly Muslim. Before the influx of Nigerian refugees, the region already faced human development challenges such as low literacy rates, a poor health system, lack of infrastructure, limited access to clean water and discrimination against women. In many villages there, families use their children as farm laborers or cattle rearers rather than sending them to school. Polygamy is also common in this region, causing women to be married early with little say in family decision-making. Many attribute this prevalence of early, child or forced marriage (ECFM) to traditional Islamic practices or local traditions.

In addition, desertification, recurrent floods and erratic distribution of rainfall makes the Far North Cameroon one of the most food-insecure regions in the country. The main staple foods in this region are corn, millet, rice and sorghum, but food production barely meets the nutritional needs of people.This fragile nutritional and food security situation is now compromised because of the massive arrival of Nigerian refugees. The arrival of refugees is disrupting subsistence farming activities and creating additional stress on the already meager food resources of the region.

Despite the fact that Cameroon has deployed an impressive number of soldiers to secure this border with Nigeria and prevent these terrorists from penetrating Cameroon, Boko Haram combattants are still managing to behead Cameroonian farmers and destroy and loot their properties. In January 2015, Cameroon’s  Ministry of Agriculture and Rural Development estimated that because of insecurity 70 percent of farmers in some areas of the Far North Region deserted their farms and many more missed out on key farming activities, such as timely planting.

The massive influx of refugees – now amounting to over 23,000 – also places stress on education, water and sanitation improvements. This has become so critical that Cameroon’s Head of State, Paul Biya, recently assigned 4 billion CFA Francs ($6,842,997.77) for the building of schools and provisions of basic equipment for refugees. First Lady, Chantal Biya, followed up with a 50 million CFA Francs donation ($85,537.47) for the supply of sanitation equipment to ease the strains affecting Cameroonians and Nigerian refugees. Yet, as the rainy season approaches, these strains make it likely that there will be epidemics of cholera and other waterborne diseases, further worsening an already complex situation.

The majority of these refugees and resulting internally displaced populations in Cameroon are women and children. They also make up the majority of victims of rape, murder, abduction or ECFM to members of Boko Haram. Children are being forcefully indoctrinated into Boko Haram and trained to commit heinous murders heinous such as  beheadings.

It is important for the global humanitarian community to prioritize this ongoing humanitarian crisis in the Far North region Cameroon by protecting refugees and internally displaced populations, especially women and children. In time of peace women and children are already the most vulnerable population in developing countries, and time of crisis they are the hardest hit. The ongoing humanitarian crisis in the far north of Cameroon is also an occasion for the government of Cameroon and the international development community to reflect on durable solutions to the development challenges that have traditionally plagued this region.