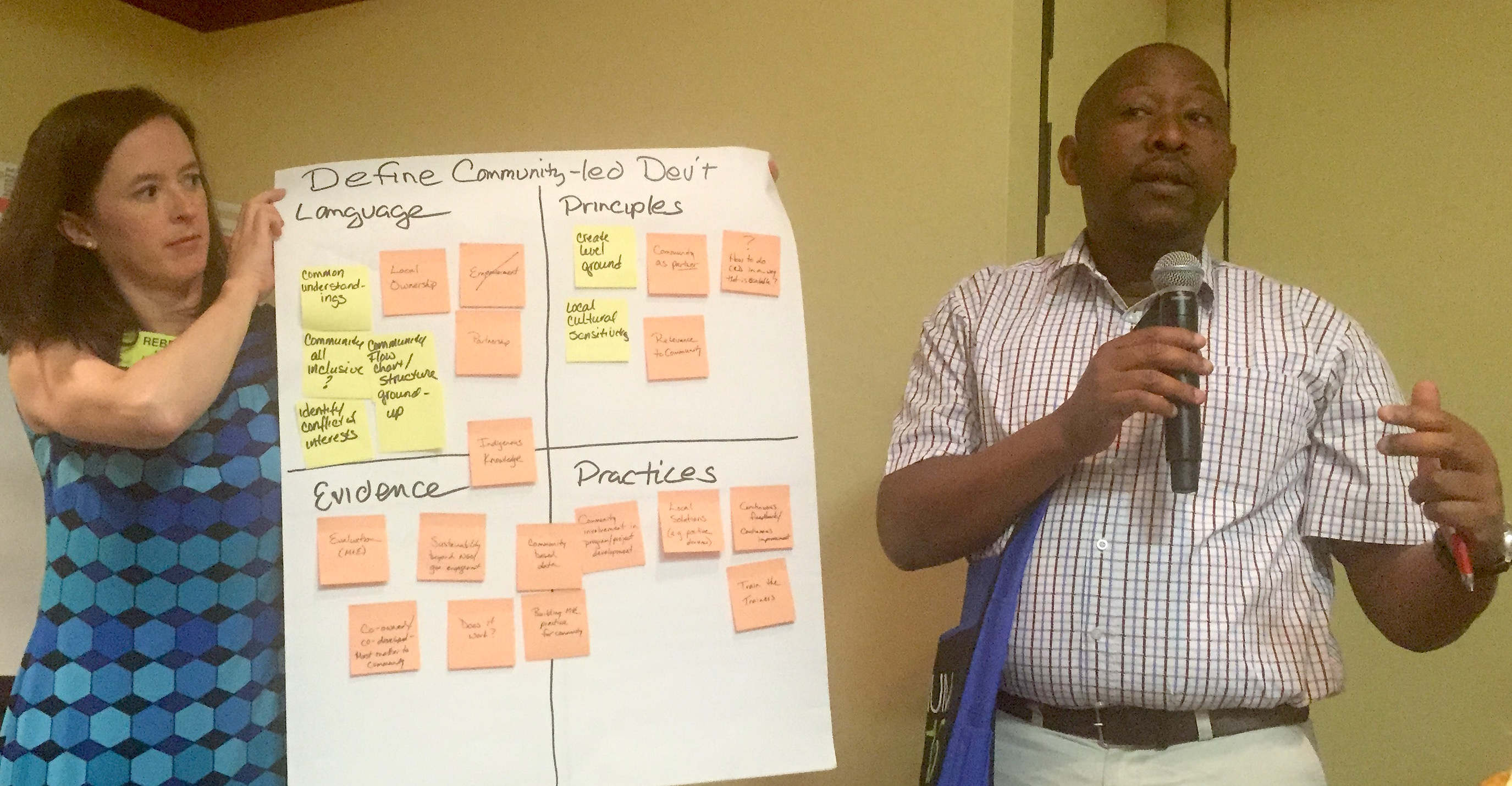 On the morning of Wednesday, June 24, the last day of InterAction Forum 2015, an excited and enthusiastic group of 50 NGO representatives participated in an Open Space workshop hosted by Catholic Relief Services, the Alliance to End Hunger and The Hunger Project.

Short comments and reflections by the hosts preceded the group table discussions, to which the majority of the workshop was dedicated. During each of two rounds, each table of 10-12 was given post-its, markers, and a poster with four thematic boxes. Group members discussed their thoughts on each category in its relation to community-led development and from the very beginning, it was clear how diverse the crowd was and how everyone’s individual backgrounds made a big difference in how they approached each concept. Despite their differences, there were generally similarities and overarching themes within and across groups. This workshop focused on participation, rather than passive listening, which made it unique and very well-received by members attending the forum.

Session I: Define Community-led Development
Language: When considering what language should be employed, there was a focus on having an adaptable, flexible definition that acknowledges local knowledge and practices and respects the community’s structure. Additionally, it should identify and conflicts and interests clearly and openly, and most importantly, is welcoming to all groups.

Principles: Participants had an opportunity to become more creative in discussing the principles of community-led development they found most important. One of the most widely-agreed principles was the high level of attention given to local norms and cultural sensitivity, which leads to “local buy-in.” Another was the inclusion of all individuals, especially the marginalized, regardless of gender, education level, age, disability, or religious affiliation. More general, but equally important, principles discussed included decentralization, sustainability, trust and equity.

Evidence: There was a particularly lively debate among one group over organic vs non-organic change: which is more effective or is a mix of both the most efficient method? Common ideas were M&E evaluation, based on community data and statistics, with an additional clause that the community was to choose success indicators. The evidence should point to both a local and global impact and that it is sustainable beyond NGO and government engagement.

Practices: There were various ideas, with several highlighting again the importance of community structure, norms, and needs. Communities need to be given the tools necessary for decision-making and finding their own solutions, including proper training and broad, bottom-up participation. Practices should be characterized by humility and vulnerability, communication and cooperation, and mutual accountability.

After the first four elements above were presented by each group, everyone returned to the task for the second time, but this time, to discuss four different categories: Allies, Elements, Messages, and Tactics in community-led development.

Allies: Particularly in this session, the question commonly raised was what exactly defined communities in community-led development. Depending on their personal and professional backgrounds, it seemed many people defined it differently. However, when discussing what allies would be required in a campaign for community-led development, answers were fairly consistent: the communities themselves, religious and traditional leaders; institutions and universities; NGOs; the local and national government; the media; and even the donor agencies.

The elements of such a campaign would largely include money and resources, as well as a timeline and supporting data such as cost-benefit analyses and ROIs in preparation for arguments on the opposition. More qualitative elements would be the amount of willingness, motivation and interest within the campaign itself.

Messages: There were several variations of what messages the campaign should promote. It would have to communicate the benefits, successes and effectiveness to keep momentum, as well as specifying tangible and impactful goals. They should include narratives from the communities themselves and be multi-pronged to cater to different target audiences. What exactly do we need to do together to complete these goals?

Tactics: The final discussion varied from specific to general, from the sensitization and education of allies to general advocacy and policy. Additionally, content should be localized and involve a community dialogue. The use of media and social media, as well as enlisting certain champions and faith leaders, were also popular ideas.

Next steps: The hosts and leadership of other organizations will keep everyone informed, reach out to others, and will determine ways to formally establish the campaign and move it into action.