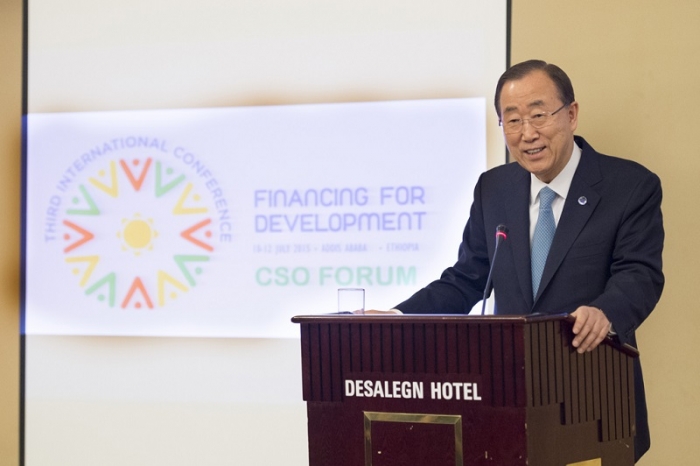 The United Nation’s Third Conference on Financing for Development (FfD3) was immediately preceded by the CSO Forum on July 11-12 at the Desalegn Hotel in Addis Ababa, Ethiopia. The Hunger Project’s Policy Analyst, Mary Kate Costello, attended the several plenaries and meetings, noting that priority was placed on human rights-based approaches, increasing people-centered development initiatives, and consensus around the fact that the world’s current ways of production and consumption are not sustainable.

In the opening plenary, UN Under Secretary-General for Economic and Social Council, Honorable Wu Hongbo, spoke vehemently about the need to look at the social impact of development through changing mindsets of the most impoverished persons. He reasoned that this must be realized through integrated approaches to ensure holistic livelihood improvement and community mobilization. Siloed approaches are essentially a development way of the past.

CSO aid and initiatives cannot sustainably be a resource upon which people are dependent. The role of civil society in carrying out and meeting the goals of the Post-2015 Development Agenda was deemed most relevant in catalyzing and urging governments to coordinate between ministries and partner with citizens, especially at the grassroots level. This will eliminate vacuums of sustainability as citizens and governments are mobilized together, ultimately mitigating dependency and disempowerment.

Regarding financing development, public-private partnerships (PPPs) and domestic resource mobilization were discussed as critical. PPPs will only be promising if avenues of sourcing and use are strategic and seek to cut risk for both parties. The main priority of action and monitoring such should be accountability and transparency wherein there lies no competition, rather broader space for opportunity. The issue of domestic resource mobilization stemmed from the fact that developing countries abundant in raw resources are obtaining poor revenue in comparison to what could be obtained within stronger systems of taxation, domestic resource processing and eliminating illicit financial flows. This issue continues to be one of key disagreement between UN Member States. There has yet to be broad consensus on reforming tax policies for the purpose of domestic ownership for development. In the meantime, many governments are not implementing necessary legal processes to behoove development via the private sector. This includes taxation of multilateral corporations and no demand for private sector to place priority on human rights and environmental solutions.

The CSO Forum’s Closing Plenary featured remarks from UN Secretary General, Ban Ki-Moon. He also placed specific priority on the advocacy role of CSOs for the Post 2015 Development Agenda, rightfully stating that accountability for the SDGs are heavily reliant on CSOs’ mainstreaming awareness amongst citizens and stakeholders at all levels. For this, Ban Ki-Moon noted civil society’s expertise and rapport of legitimacy in the public arena to use its prerogative to speak to world leaders and assist in making the world sustainable. He also affirmed Hon. Hongbo’s statements around development being a people-centered process: bottom-up from the grassroots.

Outcome calls to action from civil society in concluding the CSO Forum were the following:
Redefine the global objective for sustainable development regulations to attempt to displace attention from the state
Rules for tax cooperation need to be rewritten
Address underlying systemic issues of the UN
Instrumentalization of gender
Countries re-adhering to the 12 ECOSOC Principles determined in 2002
Follow-up processes need to be stronger, especially for monitoring and implementation

FfD3 is one of the top three high level UN gatherings leading up to Post 2015. Member states will meet to attempt to declare consensus for the Addis Ababa Action Agenda. Civil society will be prominently present as a tripartite partner to government and UN agencies, listening to specific priorities and imparting proposals and remarks through plenaries, roundtables and hundred of side events. Adoption of the Post 2015 Development Agenda is fast approaching.

The goal of sustainability is clear, however consensus on the process[es] of implementation and financing for such remain undetermined. For civil society, the main hope is that the final drafts of the Sustainable Development Goals, the Post 2015 Development Agenda and the Addis Ababa Action Agenda be unreasonably ambitious.