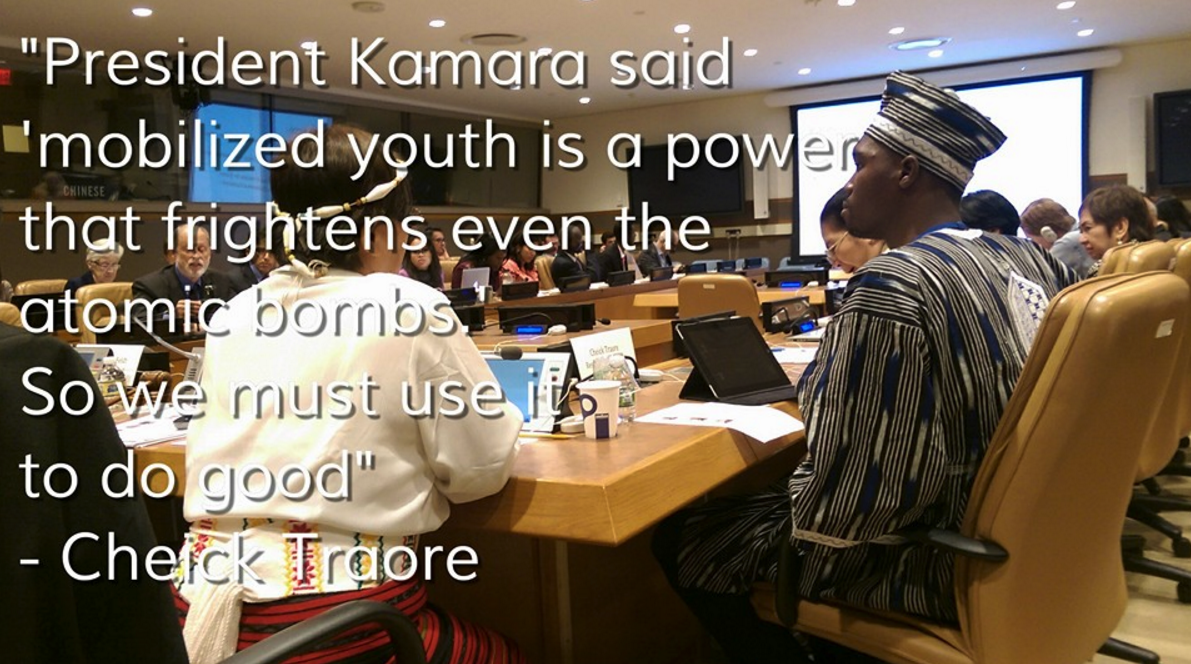 It is not new knowledge that half of the world’s population is made up of persons under the age of 35, the majority of whom are youth older than 15. As the expiration of the Millennium Development Goals near, the world will be responsible for achieving sustainable development within only fifteen years. In the absence of the estimated two trillion dollars per year to realize the recently adopted Sustainable Development Goals, development initiatives must be implemented efficiently and – ideally – through community leadership to reduce loss of money from trickle-down approaches. Volunteerism, local capacity building, local and youth leadership and community mobilization will be necessary, not optional.

The United Nations has keenly prioritized youth leadership and youth mobilization to not only implement the SDGs, but to also establish youth’s rightful ownership over their communities’ and nations’ development. Without their ownership and engagement for both current and future leadership in alignment with the SDGs, the goals are at a serious risk of not being achieved by 2030 – a window of development opportunity that may very well be the last to ensure stable security and the eradication of hunger and poverty forever. Therefore, on December 9, 2015, The UN Security Council unanimously adopted Resolution 2250 to emphasize the importance of youth leadership and inclusion to achieve peace and security worldwide. The approach? Youth (ages 18-29) representation for decision making – at all levels – must be increased.In my opinion, this is the most important Resolution adopted by the Security Council since Resolution 1325 in 2000, which similarly acknowledged the need for increased inclusion of women in peace building processes due to the unique gender roles of increasing warfare. Like women, youth account for a significant number, if not majority, of civilians affected by armed conflict and living as refugees or displaced persons. In under 10 minutes, Resolution 2250 was adopted, proving that the Security Council finds it significantly less advantageous to “marginalize” a majority population that has significant capability than leverage and include them as a priority resource for peace and security. A lack of youth leadership and representation poses the risk of losing youth to other priorities such as joining rebel groups or contentment with helplessness.

The millennial generation is uniquely positioned on the global stage amidst globalized technological communication and exposure to improved living standards or policies through available internet connections. Millennials living in extreme poverty are arguably the first from which a majority are rejecting a rural livelihood built on agriculture, instead opting for informal or illegal employment in more urban settings or internet means. They are at a higher risk than youth of any previous generation to be recruited in greater numbers by terrorists or rebels through exploitation of internet access and other forms of modern communication (i.e. texting hot lines). They are also at a significant risk of long-term unemployment and continued poverty should they not be included in the discourse of development plans, from which we risk their disagreement with approaches or priorities to achieve the SDGs. These are risks we must mitigate.

Beyond what I consider to be a moral imperative of the inclusion of a youth voice – at all levels – in peace building and dispute resolution, it is to the world’s economic advantage that UN Member States implement Resolution 2250 [promptly] into practice, establishing conducive policies if need be. Especially for those nations whose conflict has hindered youth education and employment opportunities, their inclusion in decision making will undoubtedly positively impact economic prosperity as solutions are deliberated and established together through the lens of youth and their desires for development.

What is the role for development actors such as foundations and CSOs to contribute to this process? Firstly, advocating for 1) meaningful implementation of Resolution 2250, and; 2) the establishment of relevant policies. Advocate also for the implementation of development initiatives, ideally in partnership with [local] government, that provide opportunities for youth leadership, education, employment and vocational training to motivate positive youth engagement and contribution to society. Lastly, I encourage the design and implementation of locally-led, youth-centered development initiatives that empower youth with leadership skills, dispute resolution skills, seat quotas within relevant committees, and program design input and leadership. Positive engagement and outcomes thereof will not only be an example to governments and multilateral implementers of the positive impact of youth leadership and inclusion in discourse, but will also increase the number of youth engaged in development practices in the absence of government or others’ capacity to scale-up initiatives.

Youth have experiences to share, ideas to discuss, opinions to contribute in discourse and a unique capability given their available time, especially in the absence of employment or education. They are driven to seek and enact change due to their interconnectedness and lifestyle exposures through globalized technological communication. Youth are not the leaders of the future; they are able to be leaders now. Their risks and tribulations are issues of the present, and likely to worsen without their inclusion in development and peace building leadership. Just in time for the start of the SDGs, Resolution 2250 was adopted and must be duly implemented and recognized by all actors if we need to achieve sustainable development by 2030.