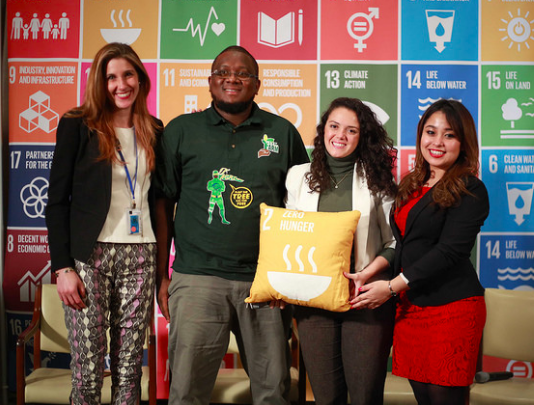 In keeping with The Hunger Project’s priority to achieve the Sustainable Development Goals through community-led development, advocacy for youth leadership and engagement has been at a forefront. The Hunger Project took a leading role in both the United Nation’s 6th Annual Youth Forum and the Winter Youth Assembly at the United Nations at the beginning of February 2017.

The Hunger Project’s Senior Policy Analyst, Mary Kate Costello, has been an active member of the United Nation’s Interagency Network on Youth Development’s Working Group on Youth and Gender Equality, and is now co-chair of its new Task Force on Young Women’s Economic Empowerment. Such engagement afforded The Hunger Project the opportunity to chair two sessions during the Youth Forum: breakout sessions on SDGs 2 and 5.

Mary Kate participated in the SDG5 session as a panelist, focusing on the importance of young women-led cooperatives, especially at the grassroots. Not only will cooperatives provide improved income generation for young women, but also offer unique social inclusion – especially for marginalized persons such as those with disabilities and indigenous women. Mary Kate stressed Coop UK’s research that cooperatives have an 80% success rate in their first five years compared to 40% for other economic initiatives and investments. Discussion during the breakout session included hindrances to gender equality in the economy as a result of both discriminatory laws and discriminatory practices that do not adhere to favorable laws for women. One such example noted was Ghana’s policies entitling women and men to have the same allowances in owning land. However, this is not reflected in the percentage of land owned by women. Approximately 15% of men own land in Ghana, whereas less than 10% women own land.[1]

The Hunger Project, as a leader in integrated community-led development, was asked to moderate one of the Youth Forum’s Media Zone Panels. Mary Kate Costello engaged with three youth leaders about their work toward SDG2, ending hunger, in their respective home countries of Trinidad and Tobago, Nepal, and Colombia. Issues covered included how to encourage youth interest in agriculturally focused employment, mobile phone technology and grassroots capacity assessments and rehabilitation of abandoned fisheries to generate exponential income. The full panel is available here.

interactive session on SDG1, ending poverty. The Hunger Project, alongside cohosts Campus Kitchens Project and FeelGood, looked
at existing youth-led initiatives toward ending hunger that mitigate poverty. The United Nation’s International Fund for Agricultural Development (IFAD) delivered the keynote address via their Lead Technical Specialist, Mattia Prayer Galletti, challenging that youth development need not only include youth in program design and implementation, but more important youth leadership in both aspects.

The Hunger Project, out of its pillar to empower women, is an organizing partner of the upcoming CSW Youth Forum from 10 – 12 March 2017, and will be featured in a plenary panel on the topic of young women-led cooperatives again. This year’s CSW Youth Forum is the second of its kind, chaired by UN Women and YWCA, as a youth-focused “opening” to the annual Commission on the Status of Women (CSW) at the UN. The Hunger Project will maintain its engagement in the arena of youth development and leadership as a key element of community-led programming to achieve the Sustainable Development Goals.

One response to “Advocating for Youth Leadership to Achieve the SDGs”